Although there are multiple indications that alcohol alters many physiological brain functions, including cerebral blood flow (CBF),  investigations have yet to evaluate how CBF changes after alcohol relate to subsets of subjects with elevated alcoholism risks, such as those with lower levels of response (LR) to alcohol – or how varying risks for alcohol use disorders (AUD) increase with a decreased CBF.

A study by the Journal of Alzheimer’s Disease shows that smoking cannabis causes the brain to age by almost three years.  Weed was found to age the brain by 2.8 years, making it worse for the mind than both bipolar disorder or attention deficit hyperactivity disorder. The result turned out to be even worse for schizophrenics, as their brains were found to age by an average of four year. For the study, researchers analyzed blood flow through 128 regions of the brain to determine how old they thought the individual was. Then they checked to see the chronological age of the person to be able to come to a conclusion on what was the effect that weed had on their brain, and how much it had aged. Speaking about the findings, lead study author Dr. Daniel Amen, warned against increased use of marijuana. “The cannabis abuse finding was especially important, as our culture is starting to see marijuana as an innocuous substance,” he said. “This study should give us pause about it.” 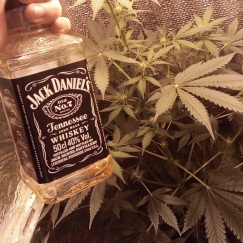 When it comes to side-effects, particularly in leading to fatalities, studies show it would take about 800 joints to kill someone, but it takes a fraction of that alcohol amount to kill a person.

of 2018, it was estimated that ride-sharing giant UBER had 75 million riders in 600 cities. Add the 18.6 million riders its closest competitor LYFT had at that same time, and that makes a lot of people refraining from getting behind the wheel. At the average cost of $10-$15, drinkers are more likely to call for a ride than risk getting a DUI driving home. It makes sense – the average DUI expenses for court costs, attorney fees and mandated drug and alcohol education, interlock devices and DMV expenses to get a driver’s license reinstated can exceed $10,000 for a first offense.  But more importantly, ride-sharing can save lives. Temple University researchers found  a significant drop in the rate of motor vehicle-related homicides, mostly involving driving while impaired, after the introduction of Uber services in California between 2009 and 2014. With the research data published in “Show Me the Way to Go Home” ht.ly/h78T30olSjZ by Brad N Greenwood and Sunil Wattal at the Fox School of Business, Temple University presented empirical work devoted to uncovering the societal benefits of ride-sharing. These findings have direct implications for policy makers and regulators by informing the ongoing debate regarding the legality of ride-sharing services, although a correlation between the use of these services and the prevention of traffic fatalities that might result from impaired driving is still unknown. The study, however, provided important insights into the potential benefits of ride sharing in terms of costs and decreasing fatalities on our highways and byways.